5 Ways to Shield the Bottom of your Car from Rust 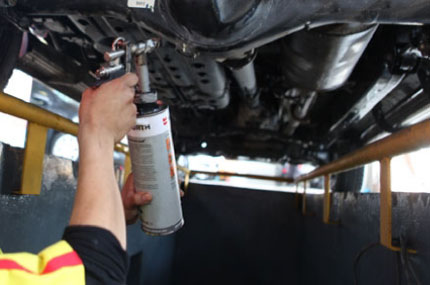 Generally speaking, people often ignore that portion of the car which is nearest to the ground: the bottom. The bottom of the car is always vulnerable to major damages, rust being only one of them. Car rust treatment varies according to the style of the service provider. If you are looking for rust treatment in Queensland, McCullochs Body Works is globally reputed for its car treatment services at highly competent prices.

In order to treat rust on the bottom of the car it is important to follow a few basic steps.

As a preventive measure it is especially recommended to regularly examine the undercarriage for signs of rust. At the same time it is equally critical to inspect the fenders, besides the other subtle areas which are not immediately visible. As the initial symptoms of rust are particularly deceiving, it is important to keep tabs on minor scratches and dents.  So far as the undercarriage is concerned, you need to call in a mechanic as the car would have to be lifted by specific equipment.

Ideally, it is recommended to wash your car especially during the turn of the seasons. Cleaning is immediately succeeded by coating which is the major step to prevent rust. Specifically, the car must be washed during spring and autumn. Also, while applying the sealant it is important to make sure that nothing is trapped under it, which might translate into rust. In spring, cars are especially vulnerable to rust thanks to the moisture and the frequent temperature fluctuations. Besides, melting snow leaves behind a trail of dirt which is equally pernicious.

There are various ways to rustproof the undercarriage of your car. For instance, you may oil the surface with a specific rustproofing spray. Generally speaking, this is the best option as the oil is particularly deft at seeping into the depths of the surface. Apart from that, you can also use thicker sealants; however, make sure that nothing is trapped under the sealant. Most importantly, ensure that the brake and fuel lines are sufficiently catered for. Nowadays, a majority of car owners uses electronic rust inhibitors which also are viable to use.

Generally speaking, the undercarriage of a car is especially vulnerable in the winter season. Therefore, it is particularly important to wash it frequently during winter. Ideally, you should wash your undercarriage every twenty days in winter. Most importantly, after every bout of snow or rain the undercarriage should be washed.

The undercarriage is always vulnerable to the damage caused by puddles. Therefore, it is ideal to avoid puddles. Puddles of standing water are nothing but the mixture of salt water and road dirt. The splash of puddles is enough to initiate the process of rust on the undercarriage.

As mentioned at the outset, the bottom of a car is the most vulnerable when it comes to rust formation. Therefore, it is essential to focus on the bottom of the car, especially during the turn of seasons.

McCullochs Body Works has been performing high quality body repairs on vehicles on the Sunshine Coast for over 40 years. Established in 1976, it has grown to become the master smash repairer of prestige vehicle[---]